My photo was posted on Dear Photograph this week! 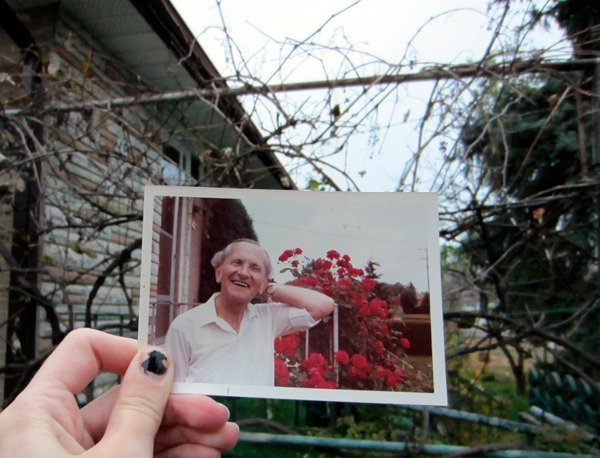 That’s my Grandpa outside of his house in the 70’s. He looks truly happy in the shot. He died about 2 years ago but once I swear I could still feel him around that house.

The picture being posted was very exciting for me. A few months ago Amber Mac had posted about this amazing site and I loved the site and really wanted to participate but didn’t really have anything in mind at the time.

A few months later, my Grandma had been planning on selling her house of over 50 years, a rough time for her but she has made it through now and is settled and adjusting at her new spot. The house sold very quickly and as part of the move she had to scale down her belongings so she kept having us in her family take things every time we were there. For months my car was packed with my stuff I had been keeping there, or things she was getting rid of and one day I was searching through the basement and found a whole chest of pictures – it was a goldmine! In the chest I found pictures from over 100 years of my family, priceless memories including a ton of pictures taken around the house that was now sold.

So on the last day I grabbed a bunch of the photos and held my own “Dear Photograph” photoshoot, it was great going around and taking pictures of a place that had so many memories for my family and that was an end of an era for us. Once I got home I took a look at them all and sent off my fav to the site and they posted it. But there are a few extras so here they are –>

I like the this last one too. That’s my Grandpa + my Mom right before she went to Spain. He’s not as happy as the shot that I ended up with but his daughter was taking off to a foreign country so there’s worry in his face.

I’m a big fan of Dear Photograph now and will keep it in the back of my mind as I wander around the earth now. Who knows, maybe I’ll do another one in 10 years infront of my own house 🙂

Jess Joyce is an SEO Consultant physically located in Toronto Ontario and who's spent the last 2 decades living online.

Is February over yet? It's too long for only 28 d

What day is it? Is it still cold? When will this a

I haven't edited a photo in 6 months but today was